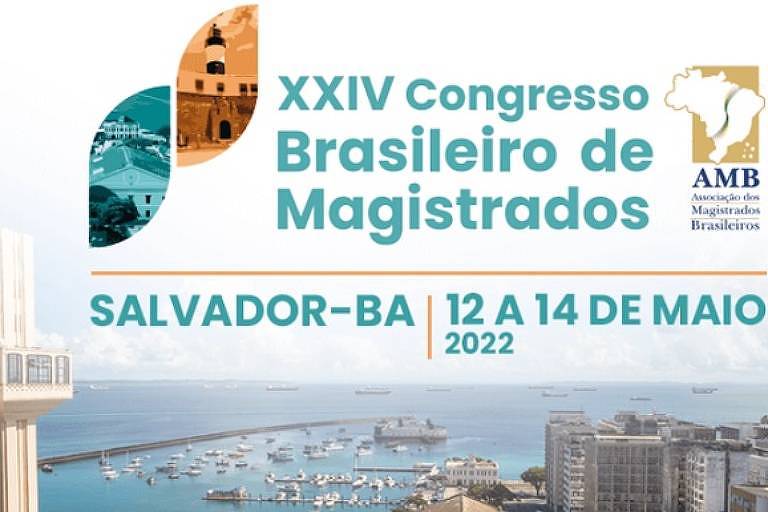 AMB (Association of Brazilian Magistrates) held, from 12 to 14 May, the 24th Brazilian Congress of Magistrates, at the Convention Center, in Salvador (BA).

The event, which takes place every three years, is sponsored by the Federal Government, Ourocard, Banco do Brasil, Anoreg (Association of Notaries and Registrars of Brazil), IEPTB (Institute of Protest), ANAB. National Association of Benefits), CNI (National Confederation of Industry) and Sococo.

The meeting was co-sponsored by the Secretary of Tourism of Bahia, the City Hall of Salvador and the Court of Justice of Bahia. The Association of Judges of Bahia is in charge.

The President of the Supreme Court, Minister Luiz Fux, will hold a large meeting. Minister Cármen Lúcia, from STF, will deliver the closing remarks.

Afghan judges threatened by the Taliban, who have fled to Brazil after the AMB’s humanitarian mission, will also speak to Congress members. They will talk about Justice in Afghanistan and threaten democratic decisions.

Among the keynote speakers were Lucinéia Possar, legal director of Banco do Brasil and Pablo Meneses, vice president of ANAB and director of Qualicorp.

Here is the event:

5/13 – 11:00 dr hab
My Panel – Digital Justice and Innovation – Innovation and Institutional Efficiency, Virtual Hearings and Integrity of Evidence and Work, Judiciary 4.0 and Results of the Research on “Legal Application and Use of New Information and Communication Technology by CPJ in cooperation with UNB and Flacso / Brasil.

5:30 – 5:30 dr hab
IV Panel – Judgment of the future – Productivity and Health / New Employment Relations / Law and Industry and Security / Agenda 2030 / Environment, Gender Equality and Children in Work Decision Making and the Importance of Role in Decision Making in the Law.